The modernization of the US infrastructure promised by Donald Trump will probably not be launched as quickly as the new US president announced. Nevertheless, modernization is necessary, and this is an important factor in the development of the American economy, which will affect all markets in the coming decade.

In the spring of 2017, the US infrastructure received an official D+ rating from the American Society of Civil Engineers (ASCE). The US Infrastructure does not meet the standards and increases the risk of emergency situations. Outdated bad infrastructure costs about $283 per month for every American family or $3,400 per year after taxes and other deductions. For comparison: the average payment on auto loans in the United States is over $500 per month.

The problem is noticeable not only in the financial sphere. For the first time in many years, the number of deaths on US roads increased and exceeded 35.000 in 2015. More than 2.000 dams are in poor condition, and the average age of more than 90.000 dams is 56 years. This is the maximum service life, which is fraught with disaster. A recent example is the breakthrough of a 60-year-old dam in Oroville, California. Despite the emergency condition of the dam, the authorities of the richest state did not repair it, as a result, in 2017, after heavy rains, about 200 thousand people had to be evacuated. 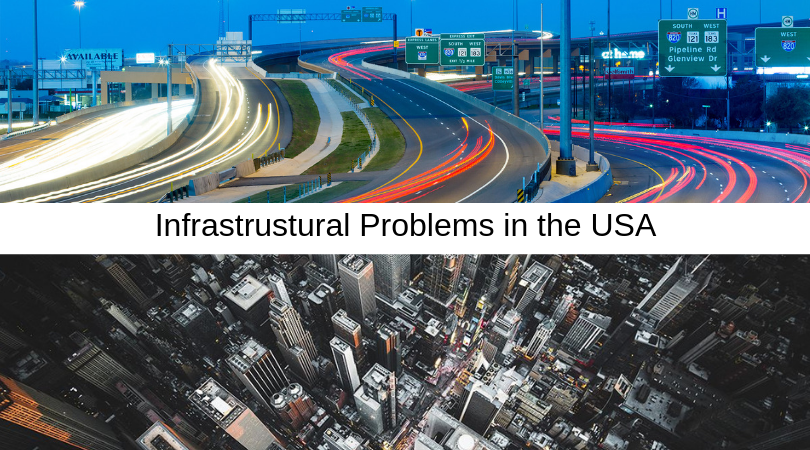 Due to leaks, American water lines lose trillions of liters of water annually. They are also close to the deadlines of service at 75-100 years and at the moment, poison drinking water.

By 2025, the United States needs to invest about $4.6 trillion in infrastructure – and this is only the cost of raising the rating to “average” level B. At the same time, it is planned to spend only $2 trillion. In July 2017, the total value of municipal transactions for financing utility transport and other infrastructure projects was $50.7 billion, which is more than 19% lower than year to year. From 1980 to 2015, investment in infrastructure projects decreased by almost 2/3%.

In the US, financing of utility and other infrastructure projects is usually made by borrowing on the municipal bond market, which has already reached $3.8 trillion. However, in 2017, the bond investments reduced by 13%, largely due to the increase in interest rates.

The promise of a large-scale modernization of the infrastructure helped Donald Trump to win the elections. Trump intended to spend $1 trillion on modernization, with only $200 billion from the budget, and the rest funds would be sponsored by private investment. The first part of financing involves increasing the budget deficit or reducing other items of expenditure, raising taxes and imposing completely new fees, perhaps like the proposed in Washington state tax on online purchases. Obtaining large-scale private infrastructure investments will not be easy, especially during the technological transformation phase related to information technology, green energy and services.

Probably, Trump will continue the policy of reducing budget expenditures in order to receive funds for infrastructure projects. But so far, budget cuts have not kept up with the increase in the defense industry expenses.

However, in the next decade, the United States will be forced to begin a large-scale modernization of infrastructure, otherwise, the country will face a series of man-made disasters. At the same time, the factor of the old infrastructure will accelerate the development of a number of technologies that will give rise to new large markets, such as satellite Internet access, home energy storage, autonomous houses, etc.